From the Library: "Lonesome Dove" by Larry McMurtry, including bonus thoughts on Sir Walter Scott's "Ivanhoe"! 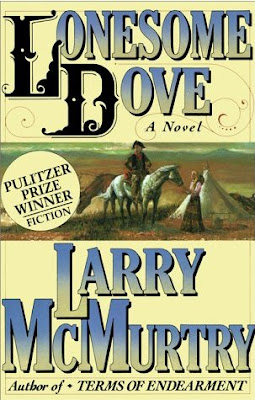 Have you read Ivanhoe? It is awesome: engaging, emotional, chilling, thrilling, and some people will even admit it's good literature. Larry McMurtry, for example, obviously thought Ivanhoe was awesome, because he wrote Lonesome Dove in homage to it (we hypothesize).

Both novels begin with pigs. Ivanhoe (1819), after a few pages of history and pastoral description, starts like this:

"'The curse of St. Withold upon these infernal porkers,' said the swine-herd, after blowing his horn obstreperously, to collect together the scattered herd of swine, which, answering his call with notes equally melodious, made, however, no haste to remove themselves from the luxurious banquet of beech-mast and acorns on which they had fattened, or to forsake the marshy banks of the rivulet, where several of them, half plunged in mud, lay stretched at their ease, altogether regardless of the voice of their keeper."

"When Augustus came out on the porch the blue pigs were eating a rattlesnake--not a very big one. It had probably just been crawling around looking for shade when it ran into the pigs. They were having a fine tug-of-war with it, and its rattling days were over. The sow had it by the neck, and the shoat had the tail. 'You pigs git,' Augustus said, kicking the shoat."

Aren't those great pig-based beginnings? We didn't notice the similarities at first, but partway into Lonesome Dove the vibe suddenly seemed familiar: the books run at the same speed, with the same peaks and troughs. Then the evidence started piling up. Both have two or three main characters and six or seven vivid supporting characters important enough to get several chapters of their own. Most of the characters in both novels are intelligent and likeable, except for the villains, who are unforgettable and terrifying. The story goes along one thing after another for awhile and we stay absolutely involved, and then the action erupts and we grow actually breathless with excitement. In both novels, everything that occurs is either deeply satisfying, or deeply frustrating but in a literarily-sati

sfying way. In both novels, the ends of many chapters read like the ends of the best novels we know. We vow to hold all fiction to this standard forevermore, and know we cannot keep the vow and go on being avid readers.

Your pal,
PDX Writer Daily
Posted by The PSU Writing Center at 4:00 AM