Art as Life, Life as Art: Reviews of Three Documentaries

[The following three documentaries keep coming up in conversation in the places we frequent, so PDXWD thought it best to just get on with writing about them.]

“If I have an essential goal on the cruise right now,” says Timothy "Speed" Levitch in a documentary about his life as a bus tour guide in New York City, “I think that the simplest goal is perhaps to be able to exhibit that I am thrilled to be alive and to be still respected.”

Which is to say that The Cruise is really not about Speed’s life as a bus tour guide in New York City at all. Rather, the film centers on one man who speaks and thinks more precisely and eloquently about cockroaches and parks and desperation than you ever will about Shakespeare or mechanical engineering or memes. Speed, whose nickname most assuredly comes from the rate at which he talks (you may recall his vignette in Waking Life at night on a bridge), spends the entire film constantly navigating away from what he calls the “anti-cruise,” which is obviously everything that stands in the way of "the cruise." Right?

Though it’s difficult to put a finger on what exactly “the cruise” is, since it’s really an urban philosophical treatise more than anything else, Speed puts it this way: “The cruise is about the searchings for everything worthwhile in existence. It is about walking into the bar and lusting after all the worthwhile possibilities of the world. It is about flesh. It is about waves undulating. And it is about exhibitionism…I mean, that’s how I feel about cruising right now.”

With rants about the grid system, disappointing his grandparents, breaking up and getting back together with the city he loves, the myth of the lamed-vavniks and the Baal-Shem-Tov, a babysitter who tried to choke him, the solidity and solidarity of the Brooklyn Bridge, and the sensuality of terra cotta cornices (not to mention amazing recitals of poems, letters, novels, and speeches) The Cruise is nothing less than a whirling, twirling beauty, burning itself at both ends.

If you’re still confused after watching it, though, don’t despair. Simply rest assured that “having an intimate quote unquote love affair with a flower is far more psychotic and riveting than having a love affair quote unquote with some of the banal creatures of the human race, although I’d be into that, too.” So would we, Speed. So would we. Philippe Petit’s ego is about as large as some of the abysses across which he has tightrope-walked, and yet this documentary about his 1974 crossing back and forth between the World Trade Center towers is supremely impressive mainly because it’s so damn unbelievable.

Mixing interviews, archive footage, reenactment, and still photography, Man On Wire is one of those rare films that makes you feel both completely inspired while also paralyzing you as you sulk and wonder what you’ll never do because you’re: 1) too scared; 2) too lazy; 3) too undetermined; or 4) all of the above.

Even if you’ve heard of Petit’s legendary feat before, this film is breathtaking in that it sheds light on the years of planning and reworking and disagreement that went into four men sneaking into the towers (costumed as workmen and businessmen) and stringing the wire between the two buildings in the course of a harrowing sleepless night. And though security measures in such places would probably thwart similar attempts today, the film does a beautiful job capturing this rebellious artistic act that somehow succeeded against all odds.

Petit, in the film’s climax, revels in the stunt for almost an hour on the wire in the crisp foggy morning air of August 7th, all while stunned and smiling onlookers below gawk and exclaim and swoon. The police, though irritated, also seem in awe of the man they arrest, even if they later let go him without pressing charges, citing the artistic quality of his deviance as reason to overlook his trespassing and impersonation and reckless endangerment.

Man On Wire reminds us of today’s street artists like Shepard Fairey (of Andre the Giant/OBEY and Barack Obama/HOPE) and Banksy (the artist who broke into museums to put up his own paintings), guerilla criminals who are beautifying our world one act at a time. Like Petit himself, whose spectacle has been called the greatest art crime of the 20th century, the philosophy “create now, apologize later” seems to live on. And god, if that’s the case, what the hell did you and I do today? 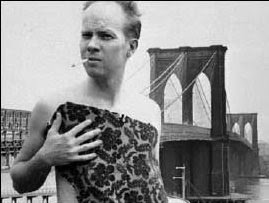 Ray Johnson is the most famous artist you’ve never heard of. In fact, let's be honest: even as we were about to begin this review of the documentary we watched and loved that trumpets his life and work from the 1960s through the 1990s, this writer totally forgot his name. And yet despite his slipping from our collective memory relatively often, Ray Johnson was known by and involved with many of the biggest names in Pop Art (Roy Lichtenstein, Andy Warhol, and Christo, to name a few) during his day.

Johnson, however, was one weird son of a bitch. Spending time on tasks and details no one else in their right mind would focus on (or even notice 95% of the time), Johnson constructed elaborate layered collages and paintings, but also involved himself as a performance artist (like hammering a box over and over and over, or throwing pieces of paper into the air and dancing around them, or dropping hotdogs from a helicopter) and considered himself to be the founder of mail art (in which he would send altered newspaper and advertisement clippings to different friends all over the country, calling the experiment the “New York Correspondance [sic] School).” His art was, very simply, his life.

The best aspects of How to Draw a Bunny are the interviews with Johnson’s colleagues who try to grasp him and sum him up for the camera, which is always a futile endeavor. The film is littered with hilariously frustrating stories: his agent recalls how nightmarish it was to represent such a slippery and rambling figure; a gallery owner says Johnson used to call and say he wanted to do a show of nothing, by which he may have meant something, or anything, but also maybe nothing; one of his portrait subjects shares letters from Johnson fraught with complicated and arbitrary price calculations for each artwork in a series.

Considering how integral Johnson figured a participating audience was to and in his work, it’s not surprising that he turned his own life, and death, into an exhibition. The very narrative framework of How to Draw a Bunny, and the concept that stays with you after the film, is the investigation of Johnson’s apparent suicide on January 13, 1995, through which he left us a byzantine, beautiful, and self-contained piece of art.
Posted by The PSU Writing Center at 9:45 AM