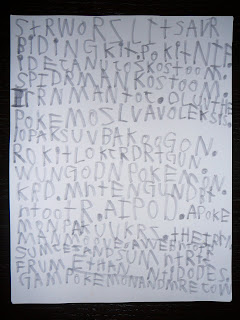 Now that was a titanic battle--another instant classic, we say. (The action took place here.) Chris always gets his points--you can't stop him, you can only hope to contain him--and Ms. Swift came out of nowhere to hit shots from waaaaaay downtown, but without the help of past stalwarts like Miss Malaprop, Keri and Co., Ben, or the mysterious Matthew, PDX Writer Daily was able to hold on and win Gestures in Literacy #6. And because of the sports narrative we've fallen into, that means we are also declaring ourselves winners of the series, four games to two. So now we hoist the imaginary GiL Cup, the symbol of our 2008 Championship, while not actually showering each other with cheap champagne, on account of we are just making this up.

Except for the part about winning. We really are claiming to have won this game that has few rules and almost no oversight or consistency. But of course those aspects of the sport only further made this a truly, truly special season for our team.

But you probably just want the answers to Gesture 6:

Yep. That's it. "Some pants and some shirts," right? That one would have taken a couple levels of literacy backtracking for you to solve. You have to imagine a scribe who not only sometimes switches up "th" and "sh," but who also often transposes the letters, so that "ht" can actually mean "sh". And you would also have to imagine a culture in which the correct spelling of "pants" is [Weird P]-E-S.

Not fair. We know. But that's the breaks, kids.

So we would like to thank all players for a lovely 2008 Gestures in Literacy season. God bless you, every one. We will cherish this title forever, and no one will ever be able to take it away from us. Mostly, yes, because it doesn't exist. But still. But still!
Posted by The PSU Writing Center at 3:25 PM