From the Library: "Five Skies," along with some thoughts by author Ron Carlson 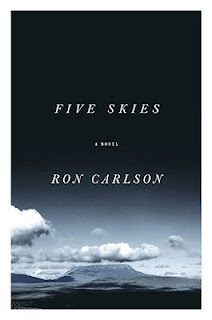 There are certain books you read that once you’re finished you can’t believe you ever existed having not vicariously lived through the experience on which the book hinges. This feeling is often accompanied by an introduction to an author you can’t believe you didn’t know had been writing all these years while you read one mediocre memoir and unaffecting novel after another. It’s like meeting someone out of the blue one day and somehow having an intensely immediate bond after only a few bits of conversation in a bar or cafe.

But this, in fact, is exactly what happens with Ron Carlson’s most recent novel Five Skies. Radically simple, the novel involves three men who are hired and descend on a barren expanse of Idaho to build an enormous ramp that will be used in a daredevil stunt. Not knowing one another beforehand, the men work day in and day out as summer blooms and their own troubled pasts come to light. As anyone who has been there knows full well, there are hardly any hiding places on the grassy Western plains and accordingly, Darwin Gallegos, Arthur Key, and Ronnie Panelli find little to do there but work and think, think and work. And work, it turns out, is what Carlson himself believes the book is fundamentally about. Via telephone, Carlson told PDXWD he thought Five Skies showcased “people solving their problems by using [their] bodies to combat abstraction.”

When we asked Carlson if there were any overt influences on his creating Five Skies, the author said that his 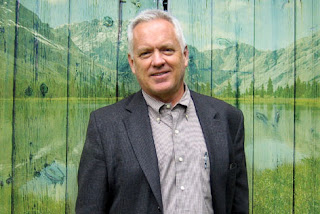 writing it “paralleled the way the men in the novel build the ramp—step by step, over many years.” Five Skies, in fact, is only the second novel Carlson has published in the last 25 years. “I kept interrupting it with other work,” Carlson said, unaware, it seems, of the irony of his statement. “My father was an engineer, a brilliant and very careful person. We talked a lot about that, using oneself to make something happen, to achieve something.”

Carlson, who teaches at the University of California at Irvine and who has written four collections of short stories and three other novels, considers the various distinctions his novel has garnered “pure gravy.” His sentiment, like many of the phrases and scenes that make up Five Skies, seems not only completely honest, but also perfectly descriptive, one of the author’s and the novel’s greatest attributes.

All told, Five Skies may end up reminding readers of Hemingway’s novella The Old Man and the Sea, especially in the sense that the characters are all forced to confront their mortality as each participates in, as Carlson’s character Gallegos puts it, an argument with God. “There’s a dichotomy of having a heart, but also having skin and a body—that outer/inner struggle,” Carlson said. “I wanted to write a book that dealt with that dichotomy because I distrust the easy generalization. I don’t know that we learn anything by the easy epiphany or the visceral realization. Decisions are complicated and messy.”

The novel is certainly not all flowers and gems of self-realization, however, like a lesser book would be. Even more thoroughly, if subconsciously, linking himself with Hemingway, when asked if there was any one thing he really hoped readers would take from Five Skies, Carlson said, “A simple story that’s as true as possible. That’s what I want them to get and take, because a day’s writing is something I can stand on.”
Posted by The PSU Writing Center at 9:30 AM