From the Library: "The Ghost Map," engaged amateurism, and a chat with Steven Johnson 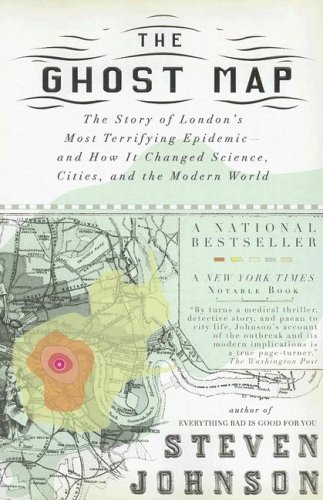 Unless you are a hardcore lit nerd, it’s hard to imagine that a book about Victorian London would be an evocative and exceptionally fantastic read.

It’s even harder to believe that such a book would be wholly relevant to the plights of modern civilization, and yet that is exactly what Steven Johnson’s haunting historical narrative The Ghost Map is. From his cell phone in a cafe in Brooklyn recently, the best-selling author of the polemical Everything Bad is Good For You and the recently released The Invention of Air asserted that The Ghost Map is “not just a book about history,” but “a book about why this particular point in history is incredibly relevant for a number of reasons.”

That point in history is the horrifying cholera outbreak on Broad Street in London’s SoHo district in 1854 that ultimately claimed hundreds of lives in less than two weeks. Told in chapters named for each day that the epidemic ravished the neighborhood, Johnson follows the path of Dr. John Snow, an amateur epidemiologist who has a theory that the spread of the disease is somehow related to the water pump in the center of the district. Though it does so understatedly, The Ghost Map turns out to be a strong case against mass-market consumerism while drawing attention to “engaged amateurism,” as Johnson writes, and the underlying heroism and undervalued advantages of knowing one’s neighbor.

Both highly readable and wonderfully conceived, The Ghost Map, then, is a resounding and noteworthy lesson in perspective and the interconnectivity of everything, from microbes to city infrastructure. Not unlike Everything Bad, The Ghost Map utilizes what Johnson calls a “long-zoom approach,” backing up far enough to have a bird’s-eye view of patterns of life and death. “One of my favorite parts of the book was attempting to figure out why the miasmatic theory [that cholera and other diseases were transmitted through the air and not the water, as we know today they are] stayed around as long as it did.” Johnson’s speculation on this point is one of the book’s most venerable aspects. Tying together parallel facets of bacterial and human evolution, microbial and urban consciousness, as well as medical and political history, Johnson compels his readers to undertake a collective self-assessment of the way they live now.

Asked why he took on the topic of Victorian disease, Johnson said, “The history of bad ideas is especially important to teach. Every age in the history of humankind has had an enormous blind spot that they don’t know about. A hundred years later, though, we can look back and see our mistakes.” Answers and revelations about these errors often come from those who “think across many fields of study at once,” Johnson said. Success, it seems, is the result of working on different levels simultaneously. The Ghost Map closes with musings on the future of humans, cities, and diseases that love nothing more than densely populated areas. And though the epilogue, with its ruminations on the next one hundred years, is truly terrifying, it doesn’t lack a dose of optimism. The book’s last line is, “So let’s get on with it,” a simple declaration that works to capture Johnson’s confidence that the human race can do monumental amounts (both individually and communally) to change our world, but only when it finally chooses to do so. And the local dedicated novice—the heroic figure at the center of The Ghost Map—it turns out, might just be our greatest weapon against disease, terrorism, and global warming.
Posted by The PSU Writing Center at 9:40 AM