Gestures in Literacy #3: Behind the Gesture 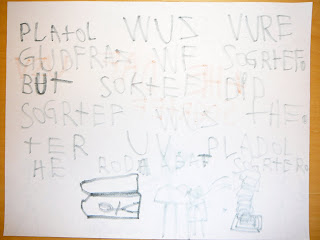 So we said we'd explicate Gesture #3 on Friday, but then the Gesture was solved almost immediately. The answer, as chris said...

Plato was very good friends with Socrates. But Socrates died. Socrates was the teacher of Plato. He wrote about Socrates. [Picture of Socrates in coffin near where Plato writes yet another book and throws it on the teetering pile of his collected works.] On the verso, in rubric, the title: The Death of Socrates. And now: The story behind the Gesture.

The author of this Gesture, recently seeing a parent-person's photos of Jacques-Louis David's 1787 painting "The Death of Socrates," naturally asked about the photos. (The painting's current home is in the collection of the Metropolitan Museum of Art.) A brief conversation was had regarding what was depicted in the painting, who painted it, why this painter ma 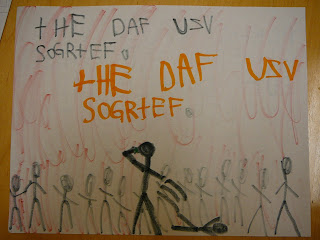 y have painted this painting, etc. The parent-person assures us the evening then moved to weightier topics, which included a screening of the second half of Ghostbusters 2, a discussion of why baths are necessary, what was available for dessert, and etc.

Before bedtime, however, during time in which The Author is allowed to draw or play in his room while the parent-person cleans up and has a second drink (there is apparently a two-drink minimum in this household), The Author, working from memory of the photos, produced the Gesture. (In the verso, pictured at right, third from top, you can see how The A 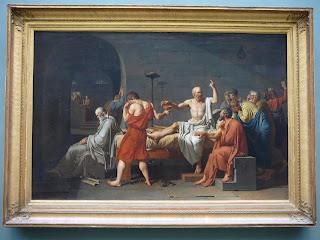 uthor accurately recalls the posture of the follower in red, but has translated David's upright Socrates to, here, a figure on the ground. And that is why eye-witness testimony can be attacked in court, people! Especially from those in the grades that have early recess.)

And but then, as we know, Chris solved the whole thing in minutes. 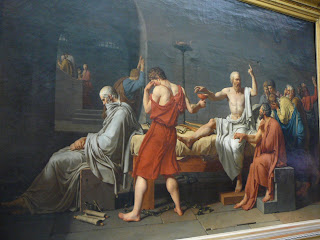 So things are going to have to get tougher around here, Gesture fans. This is getting competitive. Encourage your Gesturers to write about Longinus. Maybe that won't be so easy to figure out.

Click on any images you want to see up close, and be warned: another Gesture will appear sometime soon. And thanks for playing. If you have a gesture you'd like us to post, the email is wcevents@pdx.edu. 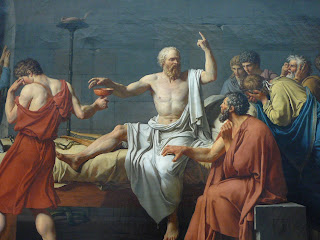 Now get back to writing, writers.
Posted by The PSU Writing Center at 1:51 PM