From the Library: "Grey Seas Under" by Farley Mowat 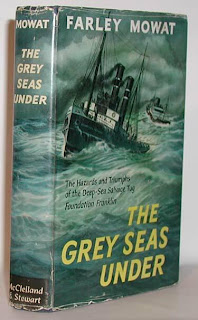 We have been wondering whatever happened to the procedural adventure novel. Remember how thrilling stories used to have a lot of how-to-ing? In between being shipwrecked and domesticating his man Friday, Robinson Crusoe explains in detail how he learned by trial and error to carve a canoe, or discovered how to fire cooking vessels. And in between being circled about by wolves and beating off locusts, we learn how the Ingalls family made maple syrup, or how Pa and Laura made a door with leather hinges for their little house.

Farley Mowat's Grey Seas Under -- which, you might know, we have been reading -- turns out to be another story in which daring exploits alternate with technical explanations. For example:

"Biederman saw that he could not hope to make the ship even remotely watertight and that there was no possibility of pumping her dry. Calling upon his long experience as a pneumatic-caisson engineer, he thereupon decided upon a risky but novel alternative. His plan was to seal number one hold from the top, making it airtight, and then force in compressed air until there was sufficient pressure to hold the water down to a safe level. Some hundreds of tons of wet and viscous grain, still remaining in the hold, were to be left in position to form a mattress nicely balanced between the pressure of the air above and that of the water below. On this, and on a cushion of air, he thought that Firby might conceivably stay afloat until she reached Quebec."

To be sure, the adventures in Grey Seas Under are thrilling: the "extraordinary ship...manned by no ordinary men" regularly takes on seas in which she "rolls so badly she put[s] her gunwales under." Her sailors undertake rescues which, "under the circumstances then prevailing seem to verge on the suicidal," with "the full weight of the Atlantic beat[ing] down through the open grille above them." All this derring-do is very nice.

Ultimately, though, PDXWD turns out to be in it for the procedures. The thrill of the novel of adventure finally comes -- does it not? -- from how it prepares us for the unlikely. Who knows if we might one day be called upon to rescue a hundred and twenty maimed, starved, and freezing Newfoundlanders from the ice, using only our wits, our courage, and our extraordinary ship? Or if we might need to know how to repair the nine-ton bilge pump in tank two? By reading these procedures, we believe we equip ourselves with knowledge we will probably need sometime. Somehow, the stuff just feels valuable.

And yet, with the exception of the crime genres, and of actual survival guides, we haven't seen a lot of novels like this published in the last few decades. (Grey Seas Under was published in 1958). So, Portland Writer, we put it to you: are we missing something, or are thrillers and spy novels the procedural novel's last stand? Discuss.
Posted by The PSU Writing Center at 9:40 AM